Home » TYPES » Shrubs » Salsola tuberculata
Back to Category Overview
Total images in all categories: 12,068
Total number of hits on all images: 7,363,048 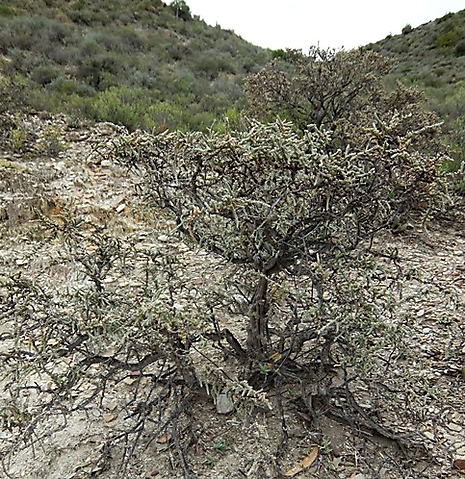 Salsola tuberculata, commonly known as the cauliflower ganna and sometimes scientifically as Caroxylon tuberculatum, is a spreading and low-growing, woody shrub reaching heights around 50 cm.

Although a small bush, the woody stem becomes thick. Several scrub species in the Karoo produce firewood, albeit on a limited scale, teaching users frugal habits of small cooking fires.

Tiny, yellow flowers are borne in small spikes, appearing in summer. Pinkish, winged fruits follow, appearing membranous and each containing only one seed.

The species distribution is in the west of South Africa and Namibia, mainly in the Western and Northern Cape with some presence in the western Free State and the west of the Eastern Cape. The photo was taken in the Kammanassie.

The habitat is clayey, often brackish flats and lowlands in semi-arid scrubveld. The species is not considered to be threatened in its habitat early in the twenty first century.

The plants are browsed, but too much of it late in a pregnancy causes grootlamsiekte (big lamb illness) in ewes (Van Rooyen and Van Rooyen, 2019; Vlok and Schutte-Vlok, 2015; Vahrmeijer, 1981; JSTOR; iNaturalist; http://redlist.sanbi.org).