Home » TYPES » Shrubs » Salsola tuberculata leaves
Back to Category Overview
Total images in all categories: 11,912
Total number of hits on all images: 7,163,199 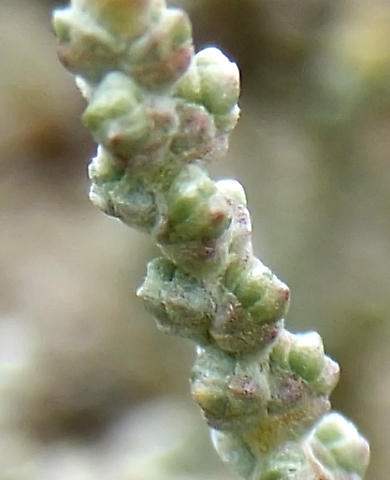 The alternate, densely overlapping leaves of Salsola tuberculata are scale-like, congested into rounded lumps. Nearly triangular to ovate and assumed stalkless, for their lower parts are hidden and the shape doesn't suggest otherwise. Whatever the case may be, these leaves don’t let anything hang loose.

The upper stem does not show itself in its youth, too well-covered for that by its silvery, angular, leaf nodules bent on maintaining their defensive clasping. Old stems, on the contrary, reveal all, for they lack the wherewithall for cover-ups (Van Rooyen and Van Rooyen, 2019; Vlok and Schutte-Vlok, 2015; Vahrmeijer, 1981; JSTOR; iNaturalist).