Home » TYPES » Shrubs » Salsola aphylla
Back to Category Overview
Total images in all categories: 11,538
Total number of hits on all images: 6,618,368 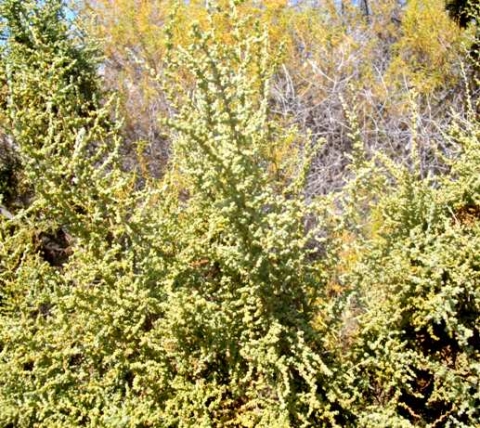 The saltbush, lye ganna or gannabos (Afrikaans), common names of Salsola aphylla, is a large, branched shrub of about 1,8 m; or sometimes just a small shrublet. It does occasionally even become a small tree of 4 m in height. Still, S. aphylla has a SA Tree List Number: 103.3.

Saltbush grows in dry watercourses of the hot and arid inland parts of South Africa and southern Namibia, the places of the region where underground water is likely to be retained longest. It also grows on floodplains in loamy and saline soils where it is dry for long periods. The plant is common in the Karoo, Little Karoo and inland Eastern Cape. The species is not considered to be threatened in its habitat early in the twenty first century.

Long ago, when settler farmers had to make their own soap or go without, boiled leaves or the ashes of burned stems of this plant were used as lye for home-made soap, explaining one of the common names of the plant (Vlok and Schutte-Vlok, 2010; Coates Palgrave, 2002; Van Wyk and Van Wyk, 1997; http://redlist.sanbi.org).