Home » TYPES » Shrubs » Rosenia humilis
Back to Category Overview
Total images in all categories: 12,068
Total number of hits on all images: 7,360,603 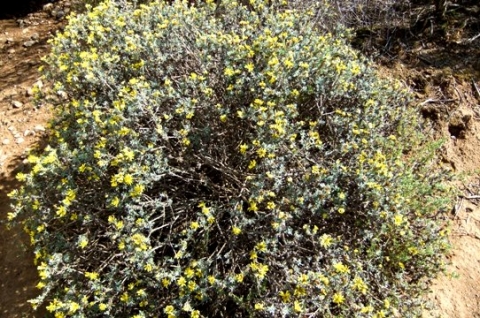 Rosenia humilis, in Afrikaans the hartebeeskaroo or perdebossie (little horse bush), is a hardy, much-branched shrublet that grows to 30 cm in height. Old flowerheads tend to persist on the plant, resembling tiny pineapples.

R. humilis occurs in Namibia and Botswana, spreading south-eastwards across the Karoo and Little Karoo to the Eastern Cape and southern Free State.

The plant grows in clay, shale or sandy soils on plains and slopes. It is not much browsed, but useful in hard times when other options have been exhausted. The species is not considered to be threatened in its habitat early in the twenty first century.

Rosenia, a genus of four yellow-flowering kinds of daisy bushes in the Asteraceae family, is distinguished from Oedera by their seeds that are crowned by scales and some long, feathery bristles (Vlok and Schutte-Vlok, 2010; Shearing and Van Heerden, 2008; http://keys.lucidcentral.org; http://redlist.sanbi.org).