Home » TYPES » Shrubs » Rogeria longiflora
Back to Category Overview
Total images in all categories: 12,086
Total number of hits on all images: 7,381,092 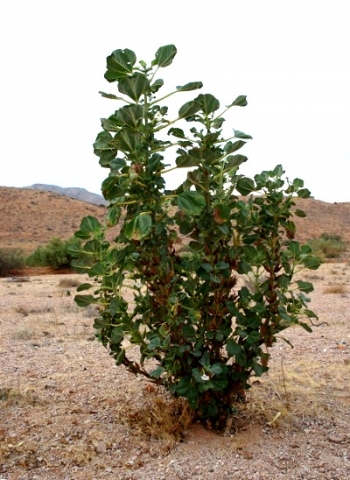 Rogeria longiflora, the desert foxglove or in Afrikaans djirrie witblom (djirrie white flower), is an erect shrub that grows to 2 m. There is only this one Rogeria species in South Africa.

The branched stems are yellow-green, woody, somewhat square in cross-section and sticky to the touch. The leaves are opposite, broadly ovate and dark green with shiny surfaces. Conspicuous veins spread from the leaf base and branch further up. Leaves are large, up to 20 cm long and wavy, sometimes recurving at the tips. They grow on long petioles.

The habitat is dry, sandy river beds. In wet years these plants multiply in sandy flats. The species is not considered to be threatened in its habitat early in the twenty first century.