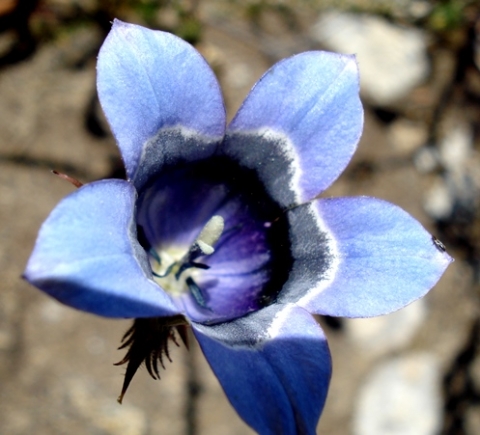 Roella ciliata is an erect or sprawling shrublet reaching 50 cm in height. The narrow leaves are stiff with sharp tips, whiskered margins and bulging midribs on their lower surfaces.

The large, blue or mauve, bell-shaped flowers grow solitary at branch tips. A dark ring or blotches occurs on the petals where they curve out from the corolla cup, the markings often framed in white. The spreading petal lobes may be rounded or broadly tapering with tiny, sharp tips. The cup is usually pale to whitish near its base, but blue and black colouring may spread into it.

The bracts are covered in whitish hairs. The ovary is hairless, the anthers dark. The two out-curving stigma lobes at the tip of the style are visible in the corolla cup in picture. Flowering happens from late winter to early autumn.

The species distribution is in the far southwest of the Western Cape from the Cape Peninsula to Worcester and Caledon. The habitat is sandy or rocky lower slopes. The species is not considered to be threatened in its habitat early in the twenty first century.