Home » TYPES » Shrubs » Rafnia schlechteriana
Back to Category Overview
Total images in all categories: 11,506
Total number of hits on all images: 6,491,835 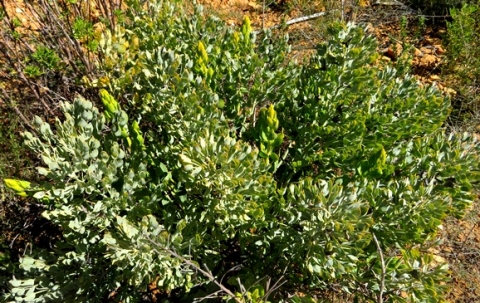 Rafnia schlechteriana is a rounded shrublet with branches reaching heights around 60 cm. Most leaves in picture are blue-green or blue-grey, unlike the yellowish new growth in picture, still narrowly erect at new stem-tips.

The species grows in a small part of the Western Cape near the west coast. The photo was taken on the Piketberg Mountain.

The habitat is fynbos sandstone slopes. The species is not considered to be threatened in its habitat early in the twenty first century (Manning, 2007; iNaturalist; http://redlist.sanbi.org).