Home » TYPES » Shrubs » Rafnia capensis subsp. pedicellata
Back to Category Overview
Total images in all categories: 11,792
Total number of hits on all images: 6,941,597 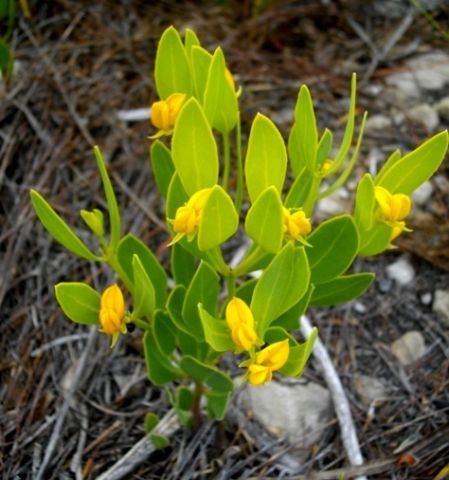 The pea flower shape of Rafnia capensis subsp. pedicellata repeats the easily recognised advertisement of the plant’s affiliation to the Fabaceae family. After knowing the family, narrowing down to genus level is the common route for discovering a plant’s identity.

The luck of finding a quick picture match only happens occasionally. When it doesn’t, the logical stepwise procedure for homing in has to be followed through noting specific plant features or using prepared keys if available. Unless the fairly brain-dead paging through a dozen books is preferred! But keep the photo for later recognition of a named plant serendipitously in a botanical garden or on iSpot.

For deciding on Rafnia: hairless plants with simple bluish leaves (without stipules) that turn black on drying branches and stamens joined in a tube slit at the top.

The yellow flowers of this plant grouped in terminal heads, bigger or smaller, are commonly seen in spring to midsummer (Bean and Johns, 2005; Manning, 2007).