Home » TYPES » Shrubs » Rafnia capensis subsp. pedicellata
Back to Category Overview
Total images in all categories: 11,792
Total number of hits on all images: 6,941,519 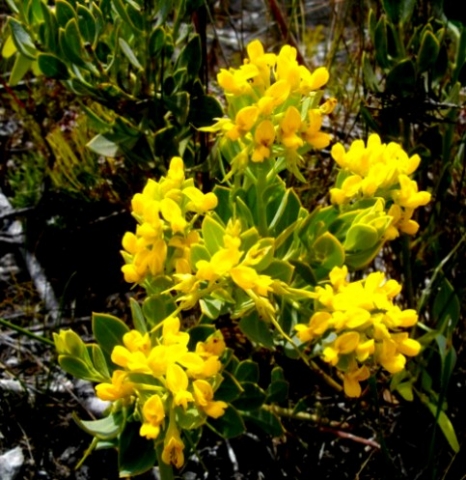 Rafnia capensis subsp. pedicellata is a spreading or erect shrub of mountain slopes and stony flats in the Stellenbosch to Bredasdorp area. The plant resprouts from its woody rootstock after fires, as do all 19 of the Rafnia species. They all occur in fynbos, although some are spread further, e.g. into parts of the summer rainfall area such as KwaZulu-Natal.

The leaves of Rafnia capensis subsp. pedicellata are simple, ovate to round with entire margins and bluish green colouring. The leaves have very short pedicels (or hardly any), although recognised in the subspecies name (Bean and Johns, 2005; Manning, 2007).