Home » TYPES » Shrubs » Rafnia capensis subsp. ovata
Back to Category Overview
Total images in all categories: 11,506
Total number of hits on all images: 6,491,774 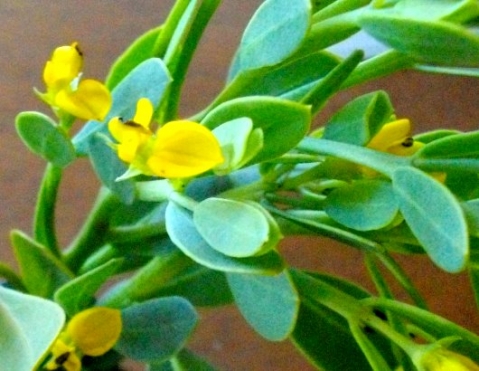 Rafnia capensis subsp. ovata is a hairless shrub, a resprouter that grows erect and spreading branches, longitudinally ridged. Its leaves are simple, without stipules, opposite and stalkless. The leaf-shape is obovate, their margins entire and the tip pointed, sometimes mucronate, i.e. bearing a tiny bristle.

The flowers are yellow, clustered at stem-tips. They are shaped like pea-flowers on bell-shaped calyces with pointed lobes. The fruit pods are narrow and compressed.

The distribution is in the Western Cape on fynbos slopes. The plant is not considered to be threatened in its habitat early in the twenty first century.

There are five recognised subspecies of R. capensis (Bean and Johns, 2005; www.redlist.sanbi.org).