Home » TYPES » Shrubs » Rabdosiella calycina
Back to Category Overview
Total images in all categories: 10,525
Total number of hits on all images: 5,176,445 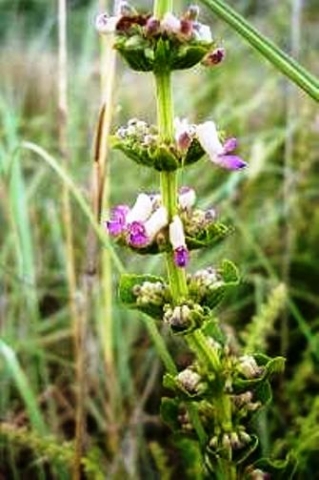 Rabdosiella calycina or fly bush is an erect shrub in the Lamiaceae or mint family with sparsely branched stems that grow annually from a woody rootstock to a height of 1,5 m. The plant used to be called by several other names, including Plectranthus calycinus, a better known genus in the Lamiaceae family.

The leaves are unpleasantly scented, sometimes have stalks, sometimes not and are broadly ovate to lanceolate with toothed or scalloped margins.

The panicles of tny cream and velvety flowers are sometimes touched with pink or mauve on the petal tips. The corollas are hairy. The flowers appear in summer into winter. There are cup-like bracts under each set of flowers on the stem.

These shrubs are found in summer rainfall grassland in the eastern parts of the country, from the Eastern Cape to Limpopo and also in Swaziland. The species is not considered to be threatened in its habitat early in the twenty first century (Manning 2009; Onderstall, 1984; JSTOR; http://redlist.sanbi.org).