Home » TYPES » Shrubs » Pycnostachys reticulata
Back to Category Overview
Total images in all categories: 11,792
Total number of hits on all images: 6,949,146 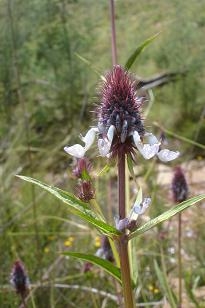 Pycnostachys reticulata is an erect, evergreen, sparsely branched shrub that grows to heights from 20 cm to 2,5 m. The leaves are opposite, toothed and lanceolate, growing on very short stalks.

The flowers occur in dense, conical, terminal spikes. The flower-shape is salvia-like, the colour pale blue to sky-blue or mauve. Flowering happens in summer and autumn.

The species is found in the east of South Africa from the Eastern Cape to Limpopo, as well as in Gauteng and North West. The habitat is moist, swampy grasslands. The plant is not considered to be threatened in its habitat early in the twenty first century (Manning 2009; Pooley, 1998; http://redlist.sanbi.org).