Home » TYPES » Shrubs » Psoralea vanberkelae
Back to Category Overview
Total images in all categories: 10,525
Total number of hits on all images: 5,176,469 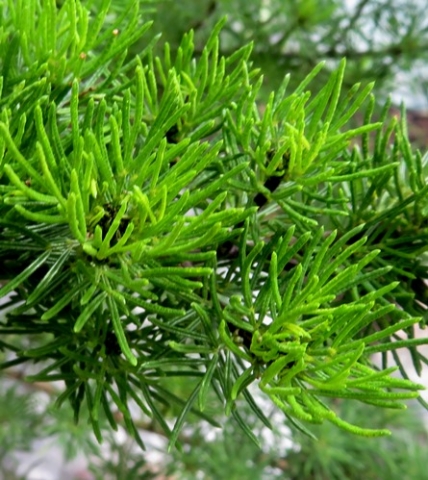 Psoralea vanberkelae, commonly known as birch fountainbush or Nicky’s fountainbush, is a small, sprawling and mounding shrub that resprouts and reaches heights around 60 cm. The erect stems have rough, grey bark, the leaves only retained near stem-tips. Young stems are blackish and hairy.

The stalked leaves are imparipinnate, comprising five linear to oblong leaflets that are fleshy with toothed margins, the rachis grooved. The leaf becomes 9 mm long and 10 mm wide.

The inflorescences grow on short hairy peduncles from leaf axils on upper, lateral shoots. The pale to intense mauve or blue flowers grow solitary, about 1 cm long. The calyx has a ribbed tube and toothed margins with black marginal hairs.

The standard petal is clawed and erect, up to 10 mm long and 8 mm wide. The wing petals are longer than the folded keel. Flowering happens from late winter to spring. The wrinkled fruit is papery, about 1,5 mm long.

The species distribution is small in an area southwest of Plettenberg Bay. The habitat is quartzite coastal cliffs where the plants grow in sandstone fynbos. The species is considered to be vulnerable in its habitat early in the twenty first century. Although the distribution is restricted and alien vegetation is invading the terrain, the population is still stable.

The species is a recent discovery, named after Ms. Nicky van Berkel, a CREW volunteer and iSpotter who focussed attention on it. The photo was taken in Kirstenbosch (Bello, et al, 2015: Psoralea diturnerae and P. vanberkelae (Psoraleeae, Fabaceae): two new species restricted to the Core Cape Region of South Africa. PhytoKeys (44): 97-107; iNaturalist; http://redlist.sanbi.org).