Home » TYPES » Shrubs » Psoralea aphylla flowers
Back to Category Overview
Total images in all categories: 11,792
Total number of hits on all images: 6,949,359 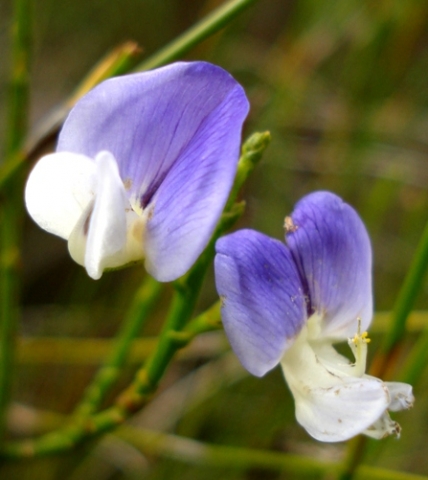 These blue and white flowers of Psoralea aphylla were photographed during October in Bainskloof. The standard of the corolla is blue; dark, purplish blue veins, parallel and spaced, run across it towards the margins without visibly quite reaching them. A dark nectar guide is present on the lower part of the central fold in the standard. The wing petals are white, partly covering the dark-tipped keel.

Yellow anthers at the tip of a thick white column of filaments hold a tall style in its midst in the photo. The other flower is still holding these parts back until ready for the pollinators. Some self-pollination occurs in Fabaceae flowers.

The hairless calyx of a P. aphylla flower covers the ovary, later concealing the ensuing pod. The lower calyx lobe is slightly longer than the other ones.

Some scale-like leaves are scattered on the upper stems in picture; only seedlings of P. aphylla may have trifoliolate leaves for a while (Manning, 2007; iSpot; Stoneman, 1928).