Home » TYPES » Shrubs » Podalyria hirsuta
Back to Category Overview
Total images in all categories: 10,504
Total number of hits on all images: 5,163,056 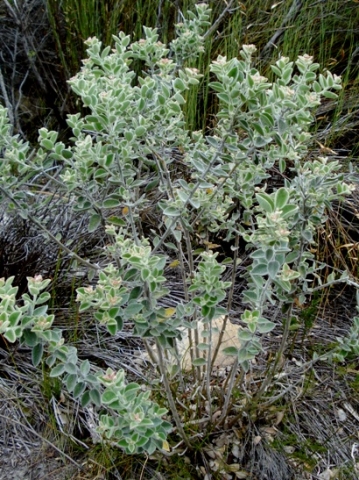 Podalyria hirsuta, in Afrikaans the harige keurtjie (hairy podalyria), is a resprouting shrub with erect, woody branches, sometimes reaching 3 m in height. The species is distributed from the Hottentots Holland Mountains in the west to the Langeberg Mountains near Riversdale in the east, growing on moist fynbos slopes.

The photo was taken in Bainskloof during October when no flowers, but fruit pods were present.

This plant is not considered to be threatened in its habitat early in the twenty first century (Vlok and Schutte-Vlok, 2010; iSpot; www.redlist.sanbi.org).