Home » TYPES » Shrubs » Pharnaceum aurantium
Back to Category Overview
Total images in all categories: 12,068
Total number of hits on all images: 7,360,628 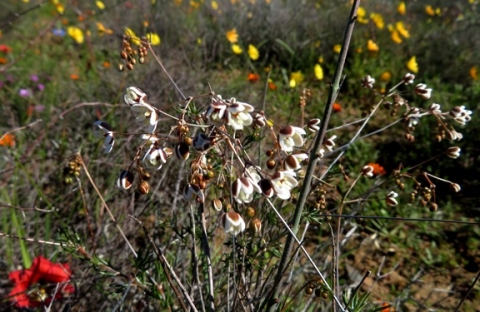 The Karoo bit in the common name may stem from the plant’s common appearance in the drier parts of the country, although it is dry in many parts of South Africa apart from the Karoo. The snow in the name may associate the plant with the colder regions where snow appears in winter, another partial fit. The vygie or mesemb connection reminds that this plant was taxonomically once classified as a member of the Aizoaceae family.

The species is distributed in the west of the country, parts of the Northern Cape and Western Cape from Namaqualand to the Cape Peninsula and the Little Karoo; mainly in the winter rainfall zone and also in Namibia. The photo was taken near Nieuwoudtville.

The plants grow in clay, loam and sandy soils in stony or gravelly places in renosterveld and some fynbos vegetation but not all of them. The species is not considered to be threatened in its habitat early in the twenty first century (Vlok and Schutte-Vlok, 2010; Manning and Goldblatt, 1997; Bond and Goldblatt, 1984; Leistner, (Ed.), 2000; iNaturalist; http://redlist.sanbi.org).