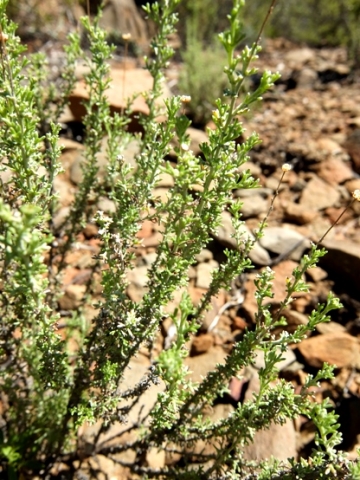 Pentzia incana is a much-branched shrub that grows to 60 cm in height. It is but one of many plants called Karoobossies (little bushes of the Karoo).

The growth habit of P. incana during rainy seasons makes some of the stems curve down and root in new places around the parent plant. This brought the plant the Afrikaans common name of ankerkaroo (anchor Karoo).

The backup rooting serves to multiply the plant vegetatively and extract more nutrients from the Karoo soil. But why anchor?

Maybe an imaginative farmer contemplating the repeated rooting, observed that wind or browser are now amply thwarted from uprooting these plants, so securely anchored.

Another possibility: Sheep farmers of the Karoo acknowledge the importance of this fodder plant that anchors their entire livelihood in farm land.

This much-browsed plant is found from Namaqualand and southern Free State to the Eastern Cape, but particularly in the Karoo and Little Karoo where it brings fame to local mutton known as Karoo lamb.

The plant is common in semi-arid lowland clay and lime soils among vegetation of various types including succulent Karoo, renosterveld and arid shrubland, excluding fynbos. The species is not considered to be threatened in its habitat early in the twenty first century (Vlok and Schutte-Vlok, 2010; iSpot; http://redlist.sanbi.org).