Home » TYPES » Shrubs » Pentzia incana leaves
Back to Category Overview
Total images in all categories: 10,504
Total number of hits on all images: 5,163,485 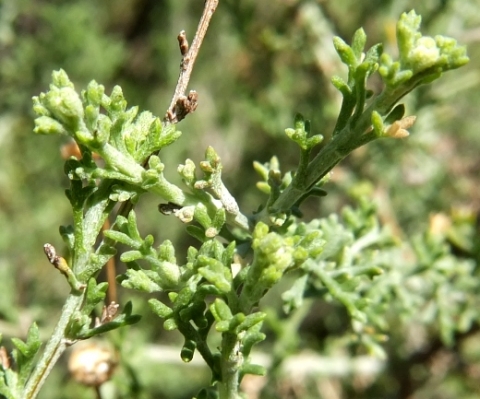 The strongly scented leaves of Pentzia incana are divided into short, stubby, finger-like lobes. The leaves are rich in an oily substance giving the plant its fragrance. Leaves are grey-green, hairy and grow on pale young upper stems. A leaf becomes 10 mm long and 5 mm wide.

This much browsed plant is found from Namaqualand and southern Free State to the Eastern Cape, but particularly in the Karoo and Little Karoo where it brings fame to local mutton known as Karoo lamb.

The plant is common in semi-arid lowland clay and lime soils among vegetation of various types including succulent Karoo, renosterveld and arid shrubland, excluding fynbos. The species is not considered to be threatened in its habitat early in the twenty first century (Vlok and Schutte-Vlok, 2010; iSpot; www.redlist.sanbi.org).