Home » TYPES » Shrubs » Pentzia dentata
Back to Category Overview
Total images in all categories: 12,091
Total number of hits on all images: 7,393,232 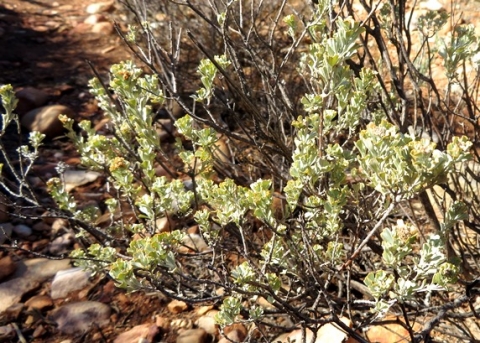 Pentzia dentata, commonly known in Afrikaans as eendepootkaroo (duck paw Karoo) and grootskaapkaroo (big sheep Karoo), is a shrub that may reach 1 m in height, typically only from 30 cm to 60 cm.

The species distribution is in the Western Cape and Eastern Cape, from Clanwilliam through the Little Karoo to Uniondale and into the Great Karoo. This plant was seen near Oudtshoorn in the Little Karoo.

The plant grows in renosterveld and parts of dry fynbos in loam soil, often on dry sandy slopes and in disturbed veld. The species is not considered to be threatened in its habitat early in the twenty first century (Vlok and Schutte-Vlok, 2010; Bond and Goldblatt, 1984; http://pza.sanbi.org; www.redlist.sanbi.org).