Home » TYPES » Shrubs » Penaea mucronata colourful stem-tips
Back to Category Overview
Total images in all categories: 11,538
Total number of hits on all images: 6,621,846 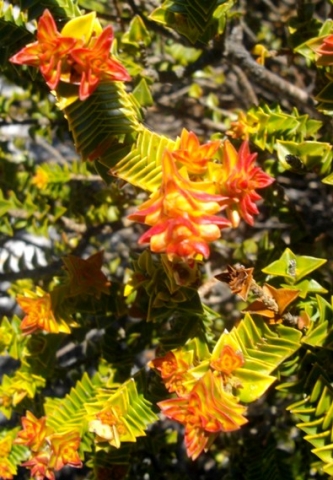 These Penaea mucronata stem tips show more recent branching than flowers. The plant was photographed on Table Mountain in November, the middle of the flowering season that lasts from late winter to end summer.

Leaves and leafy bracts at stem tips are orange on this plant, the ones just below are yellow while pale green and yellow green predominate in the general leaf colour. The regular decussate pattern of leaf overlap is accentuated by the angular leaf shape and straight, creamy yellow margins. It helps to remember that mucronata means pointed.

Leafy bracts subtending the cylindrical flowers in the picture centre envelop the four petals of each sessile flower closely. The flowers are produced in short stem tip spikes.

Common names often contribute to familiarisation and recall when they portray salient features aptly. In the case of this plant the informally acquired names of noughts and crosses and yellow brickleaf both add something to jog memory when the plant is encountered in the veld. Mnemonic devices serve to obviate uncouth utterances when yet another name slips the mind. One doesn't want the children to use socially unacceptable plant names.