Home » TYPES » Shrubs » Penaea mucronata
Back to Category Overview
Total images in all categories: 11,442
Total number of hits on all images: 6,209,857 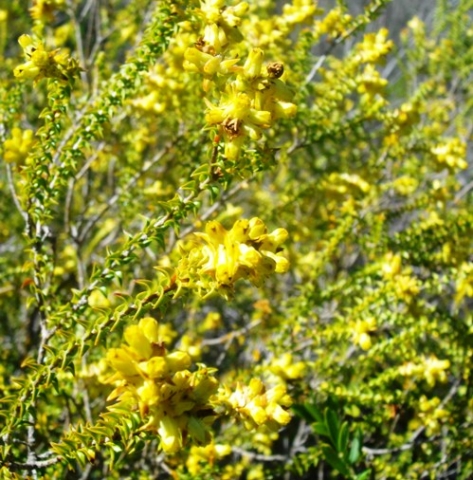 Penaea mucronata is a rounded shrub that becomes up to 1,3 m in height. The woody base resprouts after fire.

The leaves are arranged in four overlapping ranks up the many erect stems. The short flower spikes on the branch tips are yellow, darkening to orange or brick red when older.

This plant is found in the fynbos from the Cape Peninsula eastwards along the coast and nearby inland mountain ranges of the Western Cape. Some of the flowers in the western parts, the Peninsula, are said to be darker than the rest. The species is not considered to be threatened in its habitat early in the twenty first century (Bean and John, 2005; mcsa.briefyourmarket.com; Manning, 2007; http://redlist.sanbi.org).