Home » TYPES » Shrubs » Peliostomum virgatum
Back to Category Overview
Total images in all categories: 11,538
Total number of hits on all images: 6,618,006 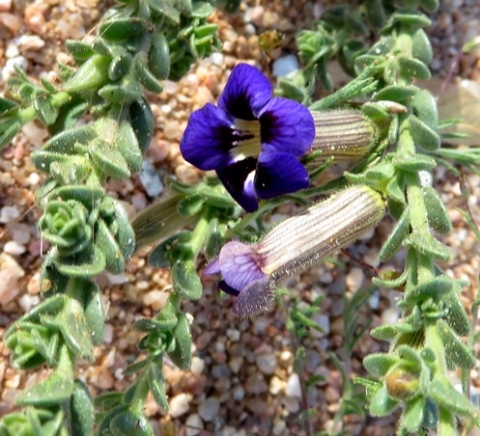 Peliostomum virgatum, commonly known as the twiggy veld violet, is a spreading dwarf shrublet that branches at the base and reaches heights around 20 cm.

The partly open flower shows the outer surfaces of the petal lobes, pale, veined and hairy. There is also a still short bud visible, pale orange-brown on top and ringed by leaves or bracts.

The species is distributed in the northwest of the Western Cape and northwards through Namaqualand and the Richtersveld in the Northern Cape. It also occurs in Namibia and possibly in the north of Limpopo and Zimbabwe. The photo was taken in the Goegap Nature Reserve.

The habitat is Nama Karoo. The plant was seen growing in arid conditions in the open on sandy flats. The species is not considered to be threatened in its habitat early in the twenty first century (Le Roux, et al, 2005; Vlok and Schutte-Vlok, 2010; iNaturalist; http://redlist.sanbi.org).