Home » TYPES » Shrubs » Peliostomum virgatum flower
Back to Category Overview
Total images in all categories: 11,506
Total number of hits on all images: 6,499,201 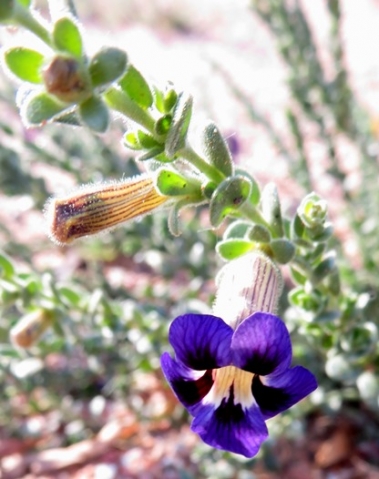 The tubular flowers of Peliostomum virgatum grow solitary from leaf axils. The cylindrical tube is off-white to greenish cream and longitudinally striped in dark purple or brownish purple. It is about 2 cm long.

At the mouth, the broadly rounded petal lobes spread and flex back somewhat. They are dark blue or purple with black patches at the base into the throat. The convex inner surfaces of these lobes have notable darker blue veining up to the margins that are entire.

The flower has four hairy anthers of equal size. This feature distinguishes the Peliostomum genus from Aptosimum that bears similar flowers but with two anthers smaller or sterile.

The small, white stigma is sometimes visible in the corolla mouth, the stamens tipped with dark anthers shorter, included in the tube.