Home » TYPES » Shrubs » Pavonia burchellii pale flower
Back to Category Overview
Total images in all categories: 11,419
Total number of hits on all images: 6,200,155 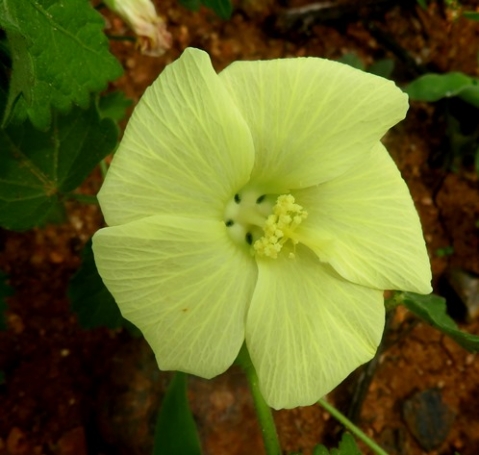 A Pavonia burchellii flower may be bright or pale, orange, yellow or white and without a dark central patch or eye. Flowers grow solitary becoming about 3 cm in diameter. This pale one with prominent vein lines across its broadly obovate petals was seen in December in the Mjejane Game Reserve.

Pavonias have additional collars or epicalyces immediately below the real calyx of each flower, the collar consisting of from 5 to 16 bracts. This species has five, sometimes six bracts in its epicalyx.

The five petals, narrow at the base, form a shallow bowl in the centre where the stamens are joined in a staminal column and spread sideways from the column in a brush-shape.

The ovary comprises five carpels, while there are ten style branches at the top of the central column (Manning, 2009; Pooley, 1998; Germishuizen and Fabian, 1982; iSpot).