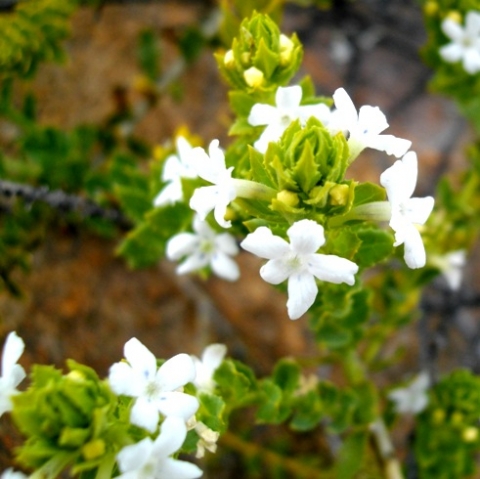 Oftia africana, commonly known as lazy bush and in Afrikaans as koekblommetjiesbos (little cake flower bush) or sukkelbos (toil, trudge or struggle bush), is a sprawling, hairy shrub reaching 1 m in height. The plants, rough to the touch, may grow together in clumps or thickets.

The species distribution of this South African endemic is mainly in the Western Cape, slightly into the south of the Northern Cape and the west of the Eastern Cape.

The habitat is rocky sandstone and granite slopes in fynbos and renosterveld. The species is not considered to be threatened in its habitat early in the twenty first century (Vlok and Schutte-Vlok, 2010; Manning, 2007; Leistner, (Ed.), 2000; http://pza.sanbi.org; www.redlist.sanbi.org).