Home » TYPES » Shrubs » Notobubon galbanum
Back to Category Overview
Total images in all categories: 11,523
Total number of hits on all images: 6,605,215 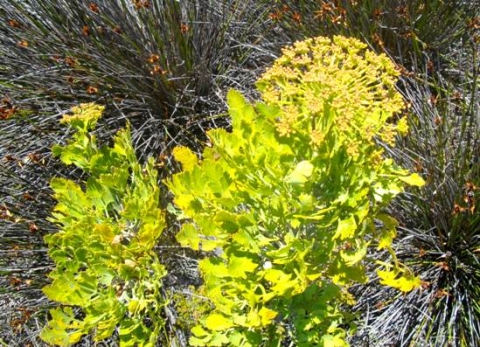 Notobubon galbanum, blister bush or in Afrikaans bergseldery (mountain celery), is a robust, resin-scented shrub that grows from 1 m to 3 m. The name has recently been changed from Peucedanum galbanum.

The genus, generally referred to as hog’s fennel, belongs to the Apiaceae or carrot family, but this species is inedible and shouldn’t be touched. It has a taproot and hollow stems that branch sparsely.

The distribution in the southwestern Cape ranges from Elandsbaai and Piketberg to the Cape Peninsula and eastwards as far as Albertinia.

The habitat is mainly upper slopes, often sheltered among rocks, in ravines and damp areas in winter rainfall conditions. The plant favours well-drained clay or sandy soils. The species is not considered to be threatened in its habitat early in the twenty first century (Manning, 2007; Bean and Johns, 2005; www.redlist.sanbi.org).