Home » TYPES » Shrubs » Notobubon galbanum, the notorious blister bush
Back to Category Overview
Total images in all categories: 11,506
Total number of hits on all images: 6,493,830 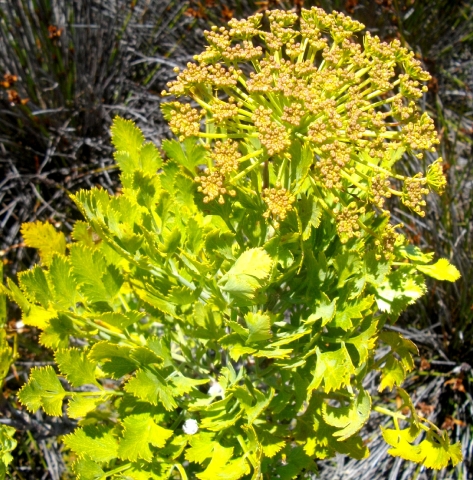 The stalked, hairless leaves of Notobubon galbanum grow densely around the stems. These leaves are notorious for causing blisters, typically in a delayed action after a day or longer of having touched skin. The blisters are associated with photosensitivity induced by sunlight and the reaction is particularly severe when the plant has been bruised or when the touched skin is perspiring.

Like many plants with known toxicity, N. galbanum has nevertheless found its way into traditional medicine.

The bipinnate leaves of N. galbanum are leathery, grey-green to yellow-green. The leaflets are ovate, diamond-shaped or three-lobed with serrated margins.

Many small flowers are borne in large, compound umbels on short peduncles from upper leaf axils. The flowers are greenish yellow on thin pedicels from end winter through summer, but flowering is inconsistent. The fruits are elliptic, about 6 mm long (Manning, 2007; Bean and Johns, 2005; Wikipedia).