Home » TYPES » Shrubs » Microdon dubius
Back to Category Overview
Total images in all categories: 11,544
Total number of hits on all images: 6,625,991 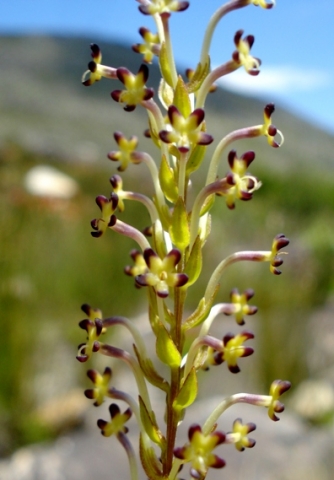 Microdon dubius, the cat's tail bush, is a heath-like shrublet growing erect, densely leafy stems to heights around 70 cm. The wand-like stems don’t grow short-shoots. The narrow, hairless leaves are alternate, ascending upon the stems. They become from 6 mm to 1,8 cm long.

The distribution of the species is from Namaqualand to the Cape Peninsula and eastwards into the southern Cape.

The habitat is rocky, sandstone slopes. Microdon is mainly a fynbos genus, six of its seven species, including this one, growing there. This plant was seen in the Kogelberg early in November. The species is not considered to be threatened in its habitat early in the twenty first century.

Some or all Microdon species used to be classified in the genus Agathelpis. The genus name is derived from the Greek words mikros meaning small and odon meaning tooth, maybe referring to teeth upon the calyx or its shape overall. Note that there is another, unrelated plant genus called Microcodon (Manning, 2007; Bean and Johns, 2005; Andrew, 2012; iSpot).