Home » TYPES » Shrubs » Metarungia galpinii
Back to Category Overview
Total images in all categories: 12,081
Total number of hits on all images: 7,379,507 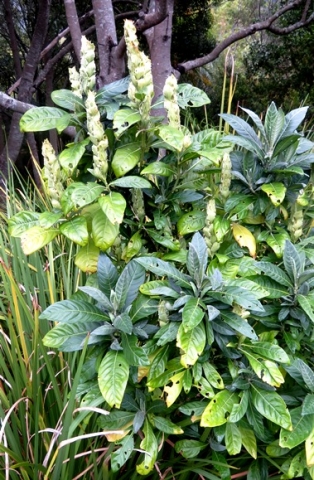 Metarungia galpinii, commonly known as Albany red-lips or southern orange-lips and previously as Macrorungia galpinii, is a much-branched, evergreen shrub reaching heights around 3 m. The plant exudes a pungent smell.

The species distribution is very small, restricted to an area close to the Gulu River near East London in the Eastern Cape.

The habitat is densely vegetated gullies, streambanks and thicket at elevations below 500 m. The species is considered to be threatened in its habitat early in the twenty first century due to habitat loss from spreading informal settlements and dam construction.

This plant is a good idea for gardens, given its looks and threatened status. It is grown from seed or cuttings (Leistner, (Ed.), 2000; JSTOR; http://pza.sanbi.org; http://redlist.sanbi.org).