Home » TYPES » Shrubs » Melhania acuminata
Back to Category Overview
Total images in all categories: 11,635
Total number of hits on all images: 6,753,054 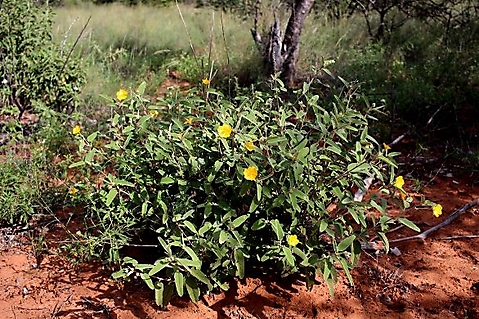 Melhania acuminata, the bushy honeycup, is a spreading, much branched shrublet of the Malvaceae family. It grows broader than tall from a woody rootstock, to heights around 75 cm.

The species distribution is in the eastern parts of South Africa from the Eastern Cape to Limpopo and as far west as North West, as well as in several neighbouring countries. The photo was taken at Hackthorne in the Limpopo Valley.

The habitat is open woodland and bushveld. The species is not considered to be threatened in its habitat early in the twenty first century (Leistner, (Ed.), 2000; JSTOR; iNaturalist; www.zimbabweflora.co.zw; http://redlist.sanbi.org).