Home » TYPES » Shrubs » Lopholaena coriifolia
Back to Category Overview
Total images in all categories: 10,526
Total number of hits on all images: 5,178,661 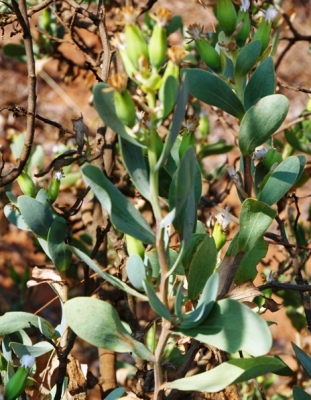 Lopholaena coriifolia, commonly the leather-leaved fluffbush, is an evergreen woody shrub that branches much. The alternate leaves are simple, elliptic to strap-shaped, grey-green in colour and stem-clasping. The blade surfaces are hairless and waxy.

The leaves may be more conspicuous than the terminal clusters of small flowerheads. Woolly seeds are freed for wind distribution. Flowering happens in spring.

The species distribution is widespread in the provinces north of the Vaal River and in some neighbouring countries. The habitat is rocky grassland where the plants favour rocky ridges. The species is not considered to be threatened in its habitat early in the twenty first century.

The plant is attractive enough, but probably not planted much, maybe retained where it occurs in larger gardens (Van Wyk and Malan, 1997; Germishuizen and Fabian, 1982; http://redlist.sanbi.org).