Home » TYPES » Shrubs » Lippia rehmannii
Back to Category Overview
Total images in all categories: 11,416
Total number of hits on all images: 6,192,712 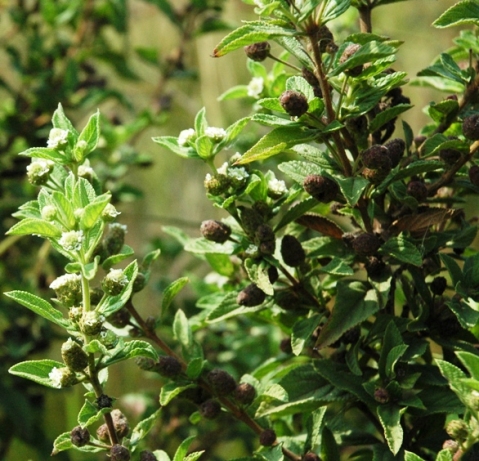 Lippia rehmannii is a woody shrub that grows to heights around 50 cm. It is quite similar to its more well known relative, L. javanica that is much used. The most valued feature is the essential oils, the key to the herbal remedies and health teas.

As may happen with the black sheep of a family, L. rehmannii is listed in South Africa (and internationally) as a weed. It is notorious for giving sheep that browse it a disease called geeldikkop (yellow thick head), an off-putting prospect, even for sheep.

In the USA the leaves of some Lippia species (there are more than 200 of them worldwide), are used in making the spice oregano, which also forms part of some curry powders.

Still, it is a pretty enough little bush with simple, opposite leaves that are rough to the touch, due to hairs and indented net-veining. The flowers appear in conical spikes (http://bodd.cf.ac.uk; www.hear.org).