Home » TYPES » Shrubs » Lippia javanica
Back to Category Overview
Total images in all categories: 11,419
Total number of hits on all images: 6,200,179 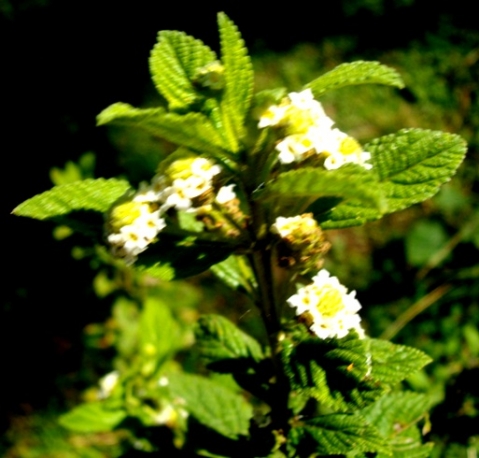 Fever tea, as Lippia javanica is commonly known, is a woody shrub with square stems (seen in cross-section). The hairy leaves are lanceolate to oblong and rough with conspicuous veining. They invite passersby to pick and crush a leaf for smelling the pleasant lemon fragrance.

Dense, rounded flowerheads comprising small white flowers are seen in summer and autumn. The corolla has four white or cream coloured lobes. The stamens are contained within the corolla tube.

The distribution of this plant over much of the east of South Africa and not at all in the winter rainfall area, extends beyond the border as far as central Africa in Uganda and Ethiopia. The habitat is grassland and bushveld. The species is not considered to be threatened in its habitat early in the twenty first century.

The javanica specific name was conferred as the plant also grows on the island of Java in Indonesia, where the tropical rainforest climate is very different to the plant’s South African habitat (Van Wyk and Malan, 1997; Blundell, 1987; Wikipedia; www.plantzafrica.com; http://redlist.sanbi.org).