Home » TYPES » Shrubs » Liparia splendens flowers
Back to Category Overview
Total images in all categories: 11,235
Total number of hits on all images: 5,944,742 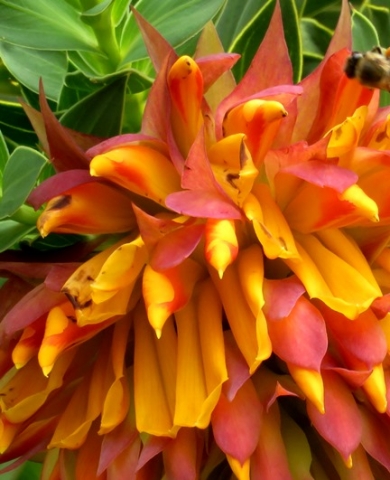 Up close, the Liparia splendens flowerhead is as much about pale pink-purple bracts subtending the flowers and sepals as about corollas. The basal bracts overlap, narrowly tapering to pointed tips. The sepals are rounded in their upper parts with small, protruding tips.

Among the flowers the lower sepals are long and conspicuous like the banner petals, coloured like the bracts. The oblong banner petals are deeply folded down the centre, their tips slightly hooded. The keel flanks have some orange colouring, the wing lobes with them.

Stamens and styles are covered as are the calyces, concealed at the flower bases. Sunbirds, particularly the orange-breasted sunbirds, push their beaks into these flowers, forcing the stamens and style out of their corolla keel covering, touching the bird’s throat feathers.

If this did not happen, liparias may have become extinct from failed pollination. Imagine the first sunbirds encountering and exploring the first Liparia flowers so many generations ago. The flowers of some plants responded, others not. Pollinator persistence ensured that some, the responsive plants baring their inner parts, survived through seed setting and producing offspring. Those not revealing anthers and stigma became extinct, adapting the surviving species through “natural” selection (Privett and Lutzeyer, 2010; Manning, 2007; Mustart, et al, 1997).