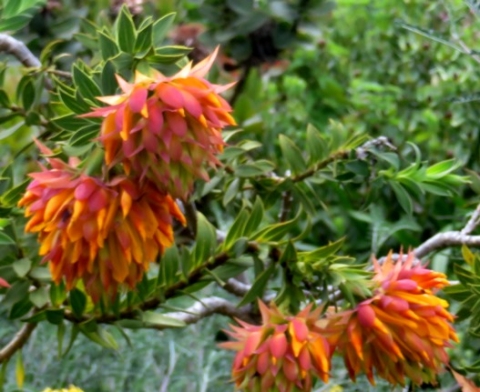 The Liparia genus of the Fabaceae family are woody shrubs or shrublets. Some are single-stemmed, reseeding after fires, others resprout from lignotubers, flowering profusely after a fire, less vigorously as the veld matures. The genus comprises 20 species, all endemic to the fynbos biome.

The leaves are stalkless, simple and variously shaped from narrow to rounded, mostly with small, persistent stipules at the base. The generic name, Liparia is derived from the Greek words lipos meaning grease, oil or fat and -arius indicating possession, referring to the oily shine on the leaves of some species.

The usually yellow flowers grow in terminal heads of at least four flowers among large, overlapping bracts. The bell-shaped calyx is five-lobed, four of them similar, the lobes longer than the calyx tube.

The banner petal or vexillum is variously shaped, usually elliptic to oblong, egg-shaped or circular. The keel is broad with a beak pointing upwards or a narrow beak pointing forward.

Nine of the ten unequal stamens are joined in a tube, the other one free and separate. The hairy ovary is stalkless or short-stalked containing few ovules. The style is hairy, ending in a small stigma. Some Liparia species are pollinated by sunbirds, others by rodents.

The fruit pod is oblong to ovate, leathery and sparsely hairy. The seeds are kidney-shaped or oblong. Seed dispersal is performed by ants that carry the fruit away and eat the elaiosomes attached to the seeds.