Home » TYPES » Shrubs » Liparia splendens subsp. splendens flowering at Silvermine
Back to Category Overview
Total images in all categories: 11,235
Total number of hits on all images: 5,944,932 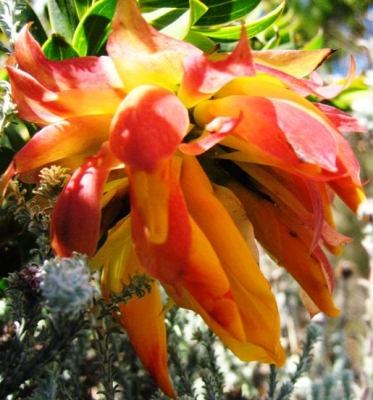 These nodding flowerheads of Liparia splendens subsp. splendens become up to 4 cm long. The photo was taken at the Silvermine Nature Reserve near Cape Town where only this subspecies occurs in nature.

The two subspecies of L. splendens, this one and subsp. comantha found from the Hottentots Holland Mountains eastwards to Aasvogelberg near Albertinia, differ in greater hairy parts of the latter on calyx lobes and flower bracts. Its flowerheads are also slightly smaller.

L. splendens grows among fynbos on flats and rocky mountain, often on the cooler, southern slopes. Subsp. splendens found on the Peninsula and Cape Flats is vulnerable in its small distribution among much development, while subsp. comantha is not considered to be threatened in its habitat early in the twenty first century.