Home » TYPES » Shrubs » Limonium peregrinum
Back to Category Overview
Total images in all categories: 11,538
Total number of hits on all images: 6,618,679 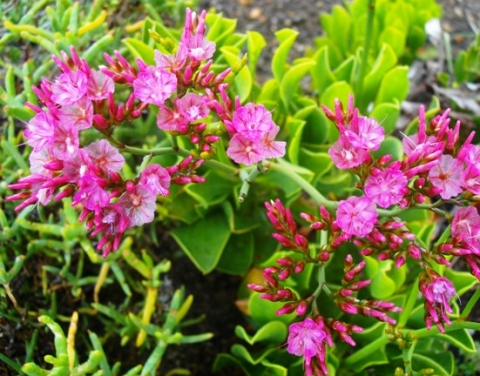 The sea lavender or papierblom in Afrikaans (paper flower), Limonium peregrinum, is an evergreen, hardy shrublet reaching 1 m in height. It is the largest of the sea lavender plants of the Western Cape.

The leaves are bunched towards the stem tips, overlapping each other and clasping the stems. The leaves are long, obovate and rough in texture.

Flat-topped sprays of rose-pink or magenta flowers at stem-tips remain for much of the summer.

The species is found along the west coast from the Peninsula to around Clanwilliam. The habitat is dunes and sandy coastal flats. The species is not considered to be threatened in its habitat early in the twenty first century.