Home » TYPES » Shrubs » Limonium capense
Back to Category Overview
Total images in all categories: 11,538
Total number of hits on all images: 6,618,425 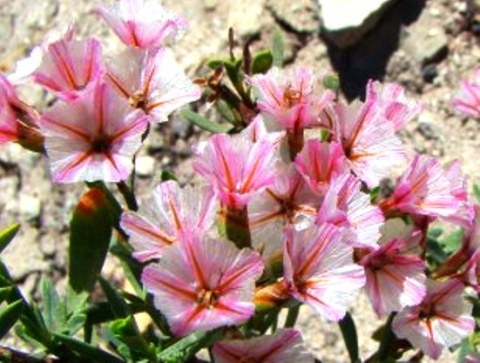 Limonium capense is a branched shrublet growing to heights around 45 cm. The limoniums of the Western Cape are often called sea-pink or in Afrikaans papierblom (paper flower). They belong to the Plumbaginaceae family.

These plants grows to about 45 cm with obovate leaves that have a pitted and a finely scaled, greyish surface. The white, papery corolla of the flower has five pink bands from the uneven corolla edge into the throat with a dark purple line down the centre of each. Flowers occur on short spikes and the plant blooms in summer.

The species is endemic to a small area of coastal limestone flats and fynbos near Malmesbury and Saldanha Bay. It is considered to be near threatened in its habitat early in the twenty first century (JSTOR; http://redlist.sanbi.org).