Home » TYPES » Shrubs » Limeum aethiopicum var. lanceolatum
Back to Category Overview
Total images in all categories: 8,907
Total number of hits on all images: 3,881,883 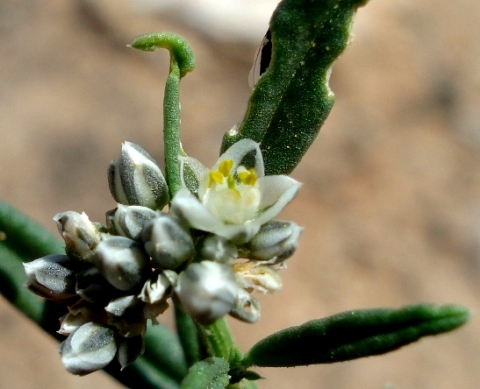 Limeum aethiopicum var. lanceolatum, in Afrikaans the koggelmandervoetkaroo (agama foot Karoo) or aarbossie (little vein bush), is a hardy shrublet that grows to 15 cm.  It is much sought after by browsing stock and game. Still, it is a robust plant not in danger of extinction early in the twenty first century.

The distribution ranges from Namibia, the Richtersveld to the Little Karoo. There are other variations of the plant, one of which, L. aethiopicum var. aethiopicum, is found widespread across Sub-Saharan Africa.

The aarbossie has hard, narrowly elliptic or lanceolate leaves with sunken midribs. Leaves grow on many spreading branches.  They are dark green in colour, slightly hairy and fleshy. The flowers are about 3 mm in diameter and grow in dense clusters from leaf axils. The five petals have longitudinal green bands in the centre on both surfaces, white near the margins.  There are tiny points visible at the tips of the rounded petals.  Some yellow anthers can be seen in an open flower in the photo that was taken near Keimoes in April.