Home » TYPES » Shrubs » Leysera gnaphalodes
Back to Category Overview
Total images in all categories: 11,538
Total number of hits on all images: 6,618,375 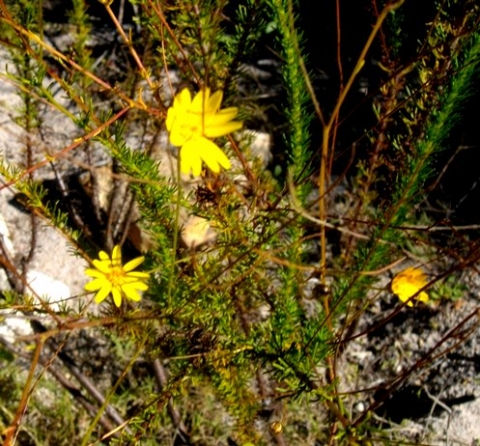 Leysera gnaphalodes, in Afrikaans commonly known as teringbostee (tuberculosis bush tea) or skilpadteebossie (little tortoise tea bush), is a single-stemmed shrublet growing hairy branches and reaching 40 cm in height. There are only three species in this genus, two of which grow in South Africa, some in the Middle East.

The grey-green, alternate leaves varying in colour are needle-like, about 1 cm long and sometimes as wide as 3 mm.

The species distribution is large, from Namibia and the Northern Cape to the Western and Eastern Cape. The habitat is sandy flats, lower slopes and disturbed land among fynbos, renosterveld, grassland, Nama Karoo and succulent Karoo. The species is not considered to be threatened in its habitat early in the twenty first century (Vlok and Schutte-Vlok, 2010; Manning, 2007; Manning and Goldblatt, 1996; iSpot; www.redlist.sanbi.org).