Home » TYPES » Shrubs » Leonotis ocymifolia flower close-up
Back to Category Overview
Total images in all categories: 8,907
Total number of hits on all images: 3,883,408 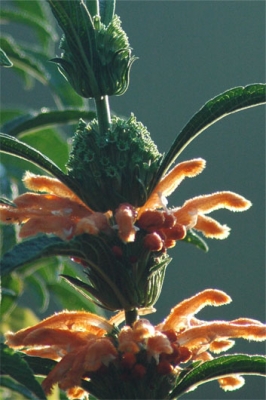 Wide geographic distribution of a species may over much time result in more variations in appearance.  This happens in survival responses of a plant to local environmental challenges.  When discontinuities in habitat are added, for instance through climate change, differences may become enhanced as plants of unconnected regions can no longer interbreed.

Formally recognized variations then become subspecies, or much later even different species within a genus and still much later distant family members.  Biological diversity is analogous to an expanding universe.  The limits of such spontaneous development is hard to imagine for an observer species caught in a small time interval of life on earth, and possibly in the universe.