Home » TYPES » Shrubs » Leonotis leonurus yellow flowers
Back to Category Overview
Total images in all categories: 11,901
Total number of hits on all images: 7,141,732 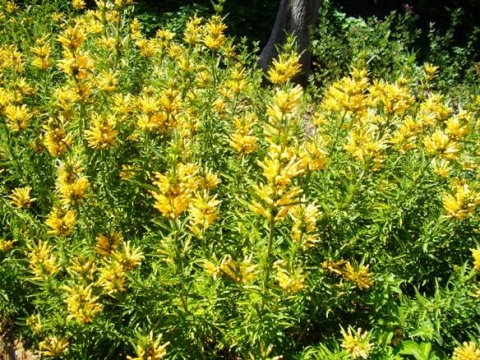 The curved tubular shape of the individual flower of L. leonurus is said to have co-evolved with the beak of the sunbirds that are adapted to access nectar from the back end of the flower tube. The transaction consists of nectar as bird food in exchange for pollination to form seeds. Evolution retains life forms suited to prevailing conditions. All living things are thus what natural selection has allowed to survive until procreation.

The debate about evolution continues at many levels while the fittest still win in the survival stakes in nature. Human pastimes include dialogue, debate, argument and worse. Plants are different in this respect, simpler, more accepting. So far. As far as people know…

This plant was photographed in Kirstenbosch in March. It lives there by agreement with humans. People had taken the initiative and the plant has complied without enforcing a bargaining process.

It shows off its charms in exchange for the care it receives in peaceful transactionalism. In the same way its deal with the sunbird over pollination is implicit but functional.