Home » TYPES » Shrubs » Leonotis leonurus
Back to Category Overview
Total images in all categories: 10,164
Total number of hits on all images: 4,829,208 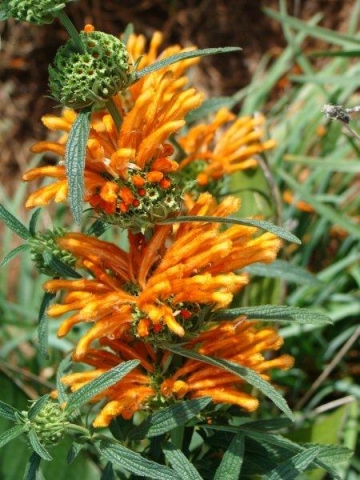 Leonotis leonurus is an erect, perennial shrub in the Lamiaceae family. It branches much and grows strongly to 2,5 m. The disc-like whorls of orange, tubular flowers, spaced up the many erect stems, have made the plant popular with gardeners. One common name for it, narrow-leaved minaret flower, aptly describes the striking whorls of flowers.

The species is distributed widely across the south, east and north of South Africa. It is not considered to be threatened in its habitat early in the twenty first century.

The long flowering season, lasting most of the year apart from the beginning of spring, has helped to maintain or even enhance this popularity. The ease of growing L. leonurus has ensured the transportation of the plant around the gardening world.

A variety of traditional medicinal uses, including the treatment of fevers, snakebite, headaches and dysentery have made the plant known even more widely.

And then there are the induced mind states achieved from smoking the leaves that increase the admiration for this plant still further. This earned the plant the name of wild dagga. Dagga is the Afrikaans name for Cannabis (Manning, 2009; Wikipedia; http://redlist.sanbi.org).