Home » TYPES » Shrubs » Calobota cytisoides
Back to Category Overview
Total images in all categories: 9,746
Total number of hits on all images: 4,372,890 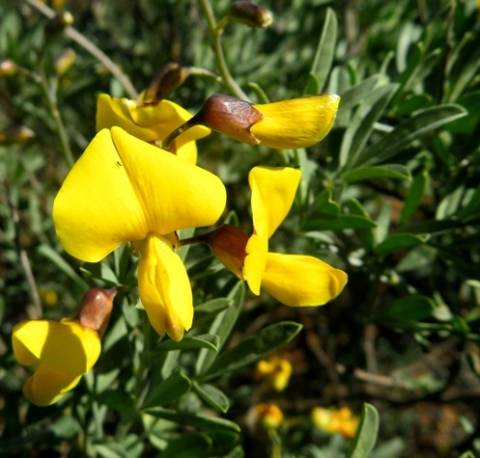 The angular back end of the Calobota cytisoides calyx is attached to the pedicel in its lower corner. Brown here and hairless, its lobed margin appears cut like clown attire, the colours fitting as well.

The halves of the erect banner petal on open flowers, folded down the centre, meet like triangular sails of a boat prepared for moving in the wind. The wings shield the keel that points forward between them closely.

The plant is distributed in the Western Cape and Northern Cape. The habitat is karoid scrub, renosterveld and fynbos. The species is not considered to be threatened in its habitat early in the twenty first century.