Home » TYPES » Shrubs » Lebeckia plukenetiana
Back to Category Overview
Total images in all categories: 11,921
Total number of hits on all images: 7,168,670 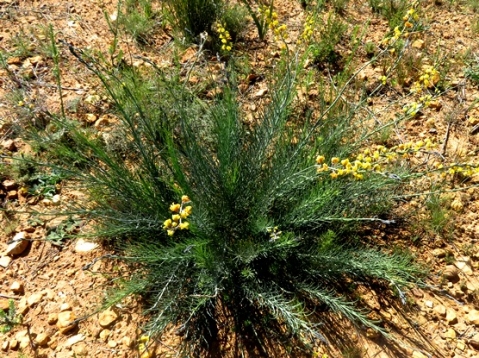 Lebeckia plukenetiana, in Afrikaans commonly called klein ganna (small ganna; ganna an old Khoi name), is a spreading to sprawling shrublet growing stems branched at the base and reaching heights from 30 cm to 50 cm. The plants resprout, may live 50 to 80 years.

The small ganna has thread-like, blue-green, simple leaves that are unjointed.

The distribution in the Western Cape is on the west coast from Langebaan to the Cape Peninsula and eastwards to Worcester. The photo was taken near Piketberg.

The habitat is mostly sandy flats among fynbos. The plant is considered endangered in its habitat early in the twenty first century, due to urban development and farming (Manning, 2007; Manning and Goldblatt, 1996; iNaturalist; http://redlist.sanbi.org).