Home » TYPES » Shrubs » Lebeckia plukenetiana flowers
Back to Category Overview
Total images in all categories: 11,921
Total number of hits on all images: 7,168,345 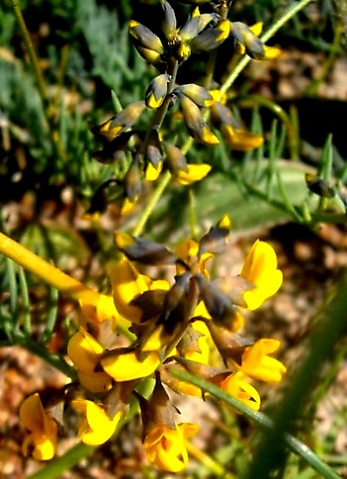 The stalked flowers of Lebeckia plukenetiana grow in short, erect racemes, a few flowers present at each node. Some of the grey-brown calyces in picture have dull yellowish parts near the base. There are five acutely pointed calyx lobes, about equal in the obliquely bell-shaped calyx.

The bright yellow corolla, similar to that of a pea-flower, consists of five petals. The keel is shorter than the banner petal, the calyx lobes shorter than the corolla tube. The stamens cohere, their filaments fused but this tube split to the base. The anthers are unequal.

Flowering happens in the first part of spring, sometimes over a longer season and often best after fire (Manning, 2007; Leistner, (Ed.), 2000; iNaturalist).