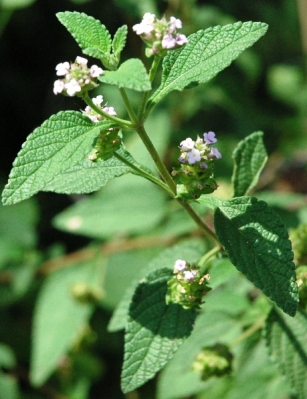 Lantana camara counts among the most unwelcome invader plants in big parts of South Africa. Then there is the innocuous, indigenous L. rugosa depicted here that should not be destroyed with the invader lantana species.

L. rugosa, previously L. salviifolia and commonly bird's beer or bird's brandy, is a much-branched, hardy, aromatic shrublet with coarse leaf surfaces from sunken venation resulting in a quilted leaf appearance. The leaves are opposite or in whorls of three or four. The specific name, rugosa, is a Latin word meaning wrinkled.

The plant  grows small, stalked pink to mauve flowers in subglobose clusters from leaf axils. Flowering happens from spring to autumn and the purple berries that follow are edible, relished by birds.

The species occurs widespread across the eastern half of South Africa. It is not considered to be threatened in its habitat early in the twenty first century (Van Wyk and Malan, 1997; Germishuizen and Fabian, 1982; http://redlist.sanbi.org).