Home » TYPES » Shrubs » Lachnaea filamentosa flower
Back to Category Overview
Total images in all categories: 11,506
Total number of hits on all images: 6,488,430 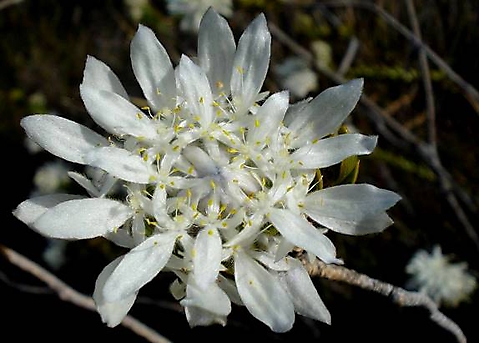 The white flowerhead of Lachnaea filamentosa may also be cream, pale blue or lilac.

A flower of the Lachnaea genus bears no petals, only four sepals. In L. filamentosa the outer sepal is nearly three times as long as the others. This lends the multiflowered head the appearance of a single flower with petals radiating in concentric, circular whorls.

In place of petals there is a ring of eight tiny scales in the flower throat, between the two whorls of four stamens each. The lower stamens are included in the short calyx tube, the upper four exserted and visibly spreading above the sepals on long thin filaments. These conspicuous filaments have been selected for the plant’s specific name.