Home » TYPES » Shrubs » Hypoestes aristata and visiting butterfly
Back to Category Overview
Total images in all categories: 11,528
Total number of hits on all images: 6,610,545 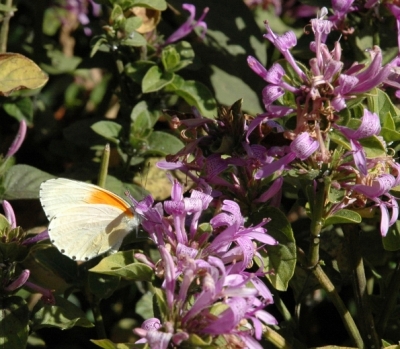 The opposite or whorled leaves on short stalks are soft, ovate in shape tapering to acutely pointed tips. The margins are entire and wavy, the midrib and lateral veins whitish.

The flowers grow crowded in spikes from leaf axils of upper stems. The two-lipped, hairy flowers are pink with purple speckles, dotted lines on the upper lip. The flowers are about 3 cm long. The calyx or estes is covered by the bracts or below them (hypo), giving the genus its name.

The species distribution is along the coast of the southern Cape to the Eastern Cape and KwaZulu-Natal and inland to the Mpumalanga and Limpopo Lowveld.

The habitat is shade of forest, scrub and thicket in both moist and dry places. There are three varieties, none of them considered to be threatened in their habitats early in the twenty first century.

The purple haze form of this plant is an example of a horticulturally created cultivar using seed of selected plants with desired features from the plants in nature (Manning, 2009; Pooley, 1998; Moriarty, 1997; http://redlist.sanbi.org.za).