Home » TYPES » Shrubs » Hymenolepis crithmifolia
Back to Category Overview
Total images in all categories: 12,087
Total number of hits on all images: 7,392,874 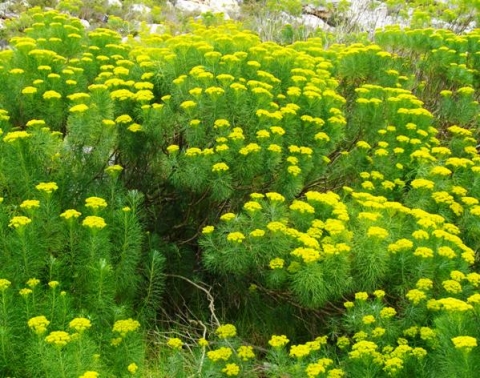 Hymenolepis crithmifolia used to be known as H. parviflora. There also was a name H. crithmoides that somehow vanished from some records.

Stands of the soft-leaved, yellow-flowering shrubs have great appeal in season. A wide variety of insects contributes to pollinating. The fruits developing in late summer are cylindrical and ribbed.

The species distribution in the western parts of the Western Cape and the Northern Cape includes regions with high variability in rainfall: high for instance in the Cape Peninsula and low in Namaqualand. The species is not considered to be threatened in its habitat early in the twenty first century (www.plantzafrica.com; www.redlist.sanbi.org).